Danielle gets her voice back

Danielle’s Nightingale Voice is Back Thanks to the Vivo 65 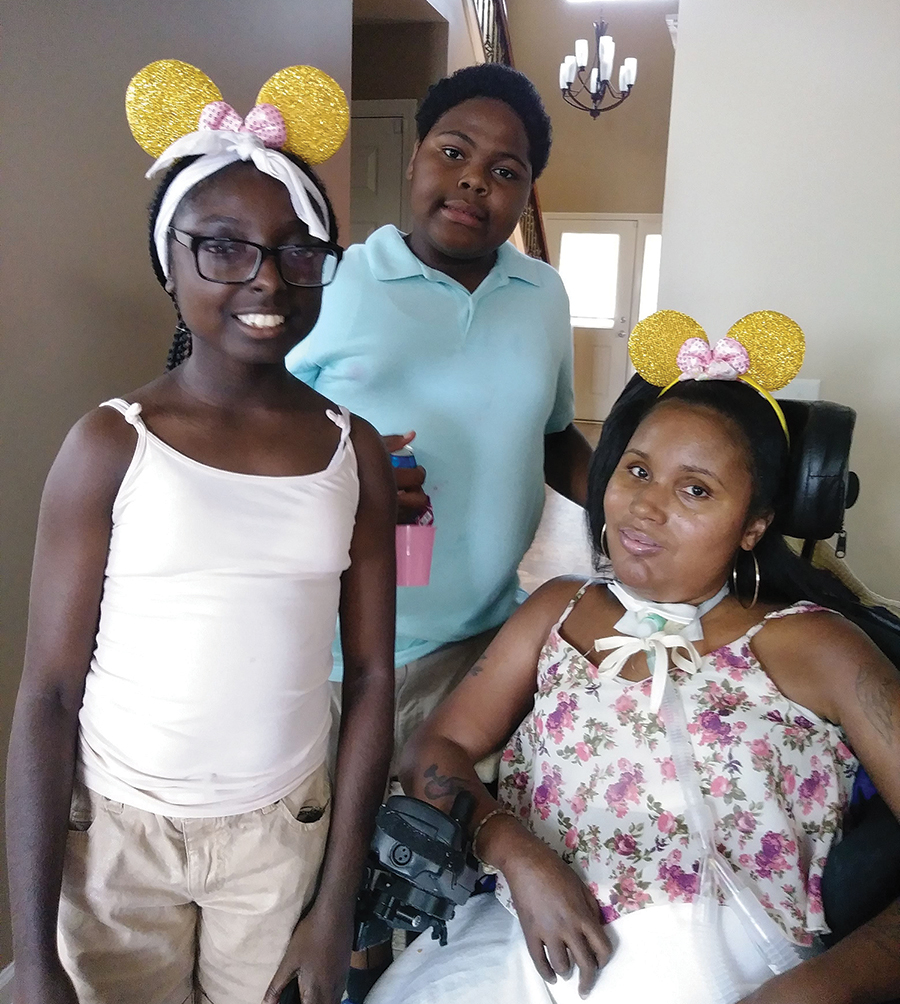 Danielle with her brother, Frederick Carpenter and sister, Kierra Carpenter

Danielle White is a lively, talkative 39-year-old woman with Duchenne Muscular Dystrophy (DMD). She loves to draw portraits in black and white with pencil. She finds drawing very relaxing and it helps with anxiety. She lives surrounded by the love of her family – mother, grandmother, two sisters, brother and nephew.

She was diagnosed with DMD when she was seven years old. Her Respiratory Therapist, Michael Cooper, was added to her health care team when she was 12, as she started having trouble breathing. She initially received nocturnal non-invasive bi-level ventilation. Her disease progressed until at age 18 she required invasive ventilation via a tracheostomy tube 24 hours per day using a LTV 1150.

Over the course of 20 years, her tracheostomy tube was upsized due to changes within the diameter of her tracheal wall. According to Michael Cooper, “10 years ago she reached the point where her tracheostomy tube could not be upsized anymore. The ENT doctors placed a cuffed Shiley LPC size 10 – the maximum size – with 10ml of air in her cuff at night and zero ml during the day (to allow for speaking). This was due to the chronic stretching of her stoma over time, resulting in adjustments to her LTV, such as, increasing the tidal volume, respiratory rate and pressure support, due to excessive leaking, higher CO2s and low volume alarms. These necessary actions resulted in her losing the ability to speak at night while her cuff was inflated.” During the day, her voice was very muted when she tried to speak. Her mother suffered from hearing loss and they had to work out a system using a handicap hearing phone in order to communicate when in separate rooms.

The Switch to the Vivo 65 Brings Positive Effects

In January 2020, her pulmonologist decided to try something different and prescribed the Breas Vivo 65 ventilator. He hoped that the Vivo 65 eSync trigger’s leak tolerance would allow them to decrease the pressure in the cuff at night to reduce the above mentioned complications. Within a few days of the transition, they checked her Arterial Blood Gases and they were comparable to the LTV but now with 0 ml pressure on the cuff at night plus her tidal volumes were reduced by 100 ml. (From 450 ml to 350 ml). For the first time in 10 years Danielle was able to speak at night.

Danielle’s voice has become stronger during the day and she can talk on the phone to her sister and friends. “my voice has gotten a lot stronger since I’ve been using it. It can project a lot more.” They all say she sounds much louder than before. 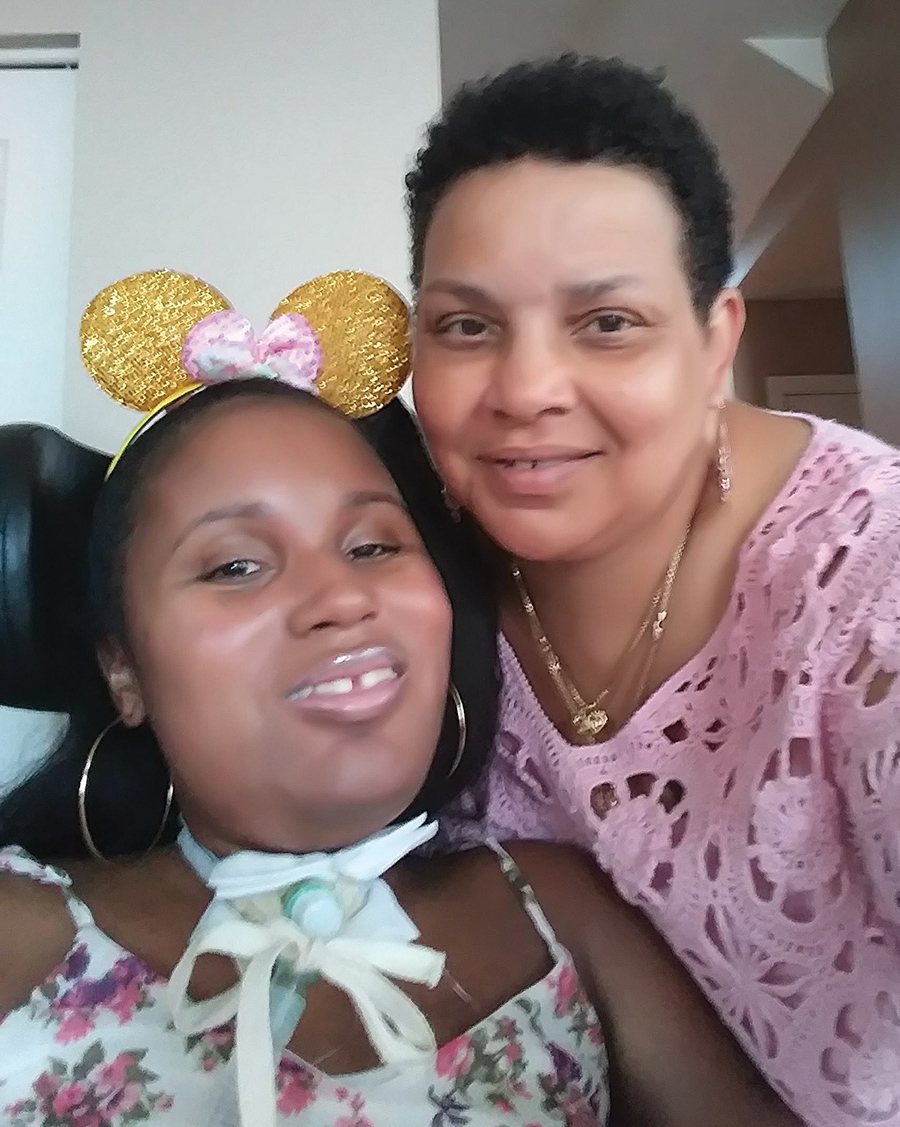 Danielle and her mother, Faith Mathis-Rials

The switch to the Vivo 65 has had other positive effects on Danielle’s life. First, she says it helps her sleep better. She wakes up with more energy. Second, Danielle has gained weight since switching to the Vivo 65. At one point she had dropped down to only 95 pounds due to what Michael Cooper believes was her having to work so hard to trigger a breath on the LTV.

Danielle also has congestive heart failure, a condition that causes swollen legs. An unexpected change since starting therapy on the Vivo 65 is that the swelling in Danielle’s legs has gone down. Michael believes this is due to Vivo’s lower tidal volumes result in improved pulmonary circulation which he expects to validate in her next echocardiogram with Right Ventricular Ejection Fraction improvement.

Thanks to the Rush University Medical Team 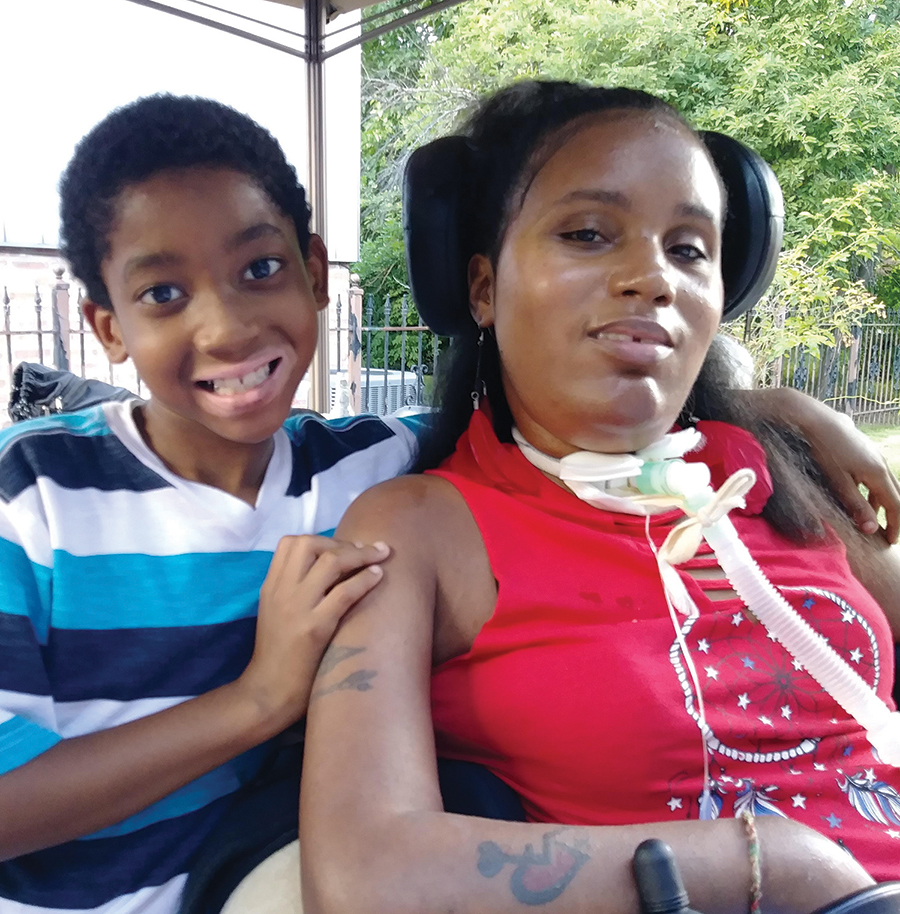 Danielle is very appreciative of her whole Rush University Medical Center team – the doctors, nurses and respiratory therapist. She says they are like a part of her family and have always gone above and beyond to take care of her. They coordinate her appointments to limit the number of trips she has to make and even have come out to her house to check on her.

Danielle feels inspired to give back to them during the COVID crisis by advocating for them. They need to be protected with good PPE and make sure they have good meals when they are too busy to eat during the crisis. “So that was something I’m really passionate about. They’ve been taking care of me my whole life. So they need someone now to help the pandemic and I try my best to get it off the ground.” She would like everyone to sign the petition #CALLOUTTHEPRESIDENT.

What the Vivo 65 Means to Danielle

When Danielle was asked about the Vivo 65, she says it’s “a thousand times better. I like trying to get it out there that being on a vent does not have to mean the end of your life. I travel with the Vivo. So I would say to you now, give it a try, and then it feels natural…. I’ve been to Jamaica on it. I’ve been to Mexico…I really want to say you don’t have to stop living.”

After listening to Danielle tell her story, it is hard to believe that for ten years she could not be heard. But thanks to the Vivo 65, that has changed as she has plenty to share 24 hours a day.

Aug. 25, 2020 – We are deeply saddened to share the news of Danielle’s passing. Her story inspires us all to live the life given us with determination and a positive spirit.

Share this page
Breas.com uses cookies to ensure you have the best browsing experience and to help us improve the site.
By continuing to browse the site you are agreeing to our use of cookies. Find out more.